Starigrad Paklenica is a small harbour town situated on the Velebit Channel, close to Paklenica National Park, 45km south of Karlobag. It was first mentioned way back in Roman times and the settlement grew up on the foundations of the ancient town of Argyruntum.

Today, however, it is the centre of the Paklenica Riviera, a 20km stretch of coastline where the mountains meet the sea, making Starigrad equally attractive to both bathers and mountaineers. Paklenica National Park provides the backdrop to Starigrad. It includes two canyons: Velika and Mala Paklenica (Grand and Small Paklenica). A creek flows through the 10km-long Velika Paklenica, and its steep sides are up to 400m high. Velika and Mala Paklenica are separated by a 7km-long, 500m-high plateau. 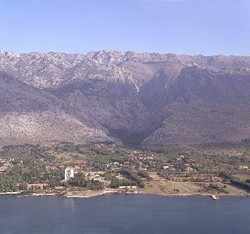 Paklenica National Park is a magnificent karst phenomenon with numerous caves, the most famous of which is Manita Peć (175m long), and Paklenica is sure to be hiding many more secrets. The entirety of the Velebit massif has been declared a nature park, and in the southeastern part, Tulove Grede (Tulo’s Rafters) stands out for its extraordinary beauty, rising up above the canyon of the River Zrmanja.

Starigrad Paklenica marks the start of Paklenica National Park, and its closeness to Mt. Velebit provides the opportunity for various sports, such as mountain climbing and free-climbing. Tourist accommodation in Starigrad is diverse, with apartments and rooms to rent, boarding houses and campsites. The old part of the town is rich in archaeological discoveries and architectural monuments, the most famous of which is the villa of Petar Hektorović.

Starigrad Paklenica has been inhabited since Roman times, but because of attacks by the Turks, it was abandoned in the 16th century, and then re-established in the 17th century. Close by, there is the small, pre-Romanesque church of Saint Peter and the ruins of Večka Tower, probably built during the Ottoman period. In recent excavations at the Roman necropolis, which has over 100 graves, various beautiful glass objects were found preserved. In the nearby Rovanjska inlet, there is the old Croatian Church of Saint George. 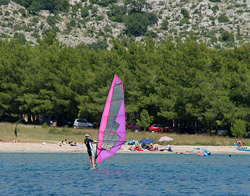 With pebble beaches stretching for miles, it is suitable for a family summer holiday, while the tennis courts, sports fields and water-sports equipment guarantee a really active stay. Spelunkers and mountaineers can enjoy the Velebit and Paklenica massifs, while walkers and plant collectors will find many magnificent walks on the slopes of the National Park. There are also many cultural events, including artistic performances and other forms of entertainment.

The food available centres around the local cuisine, including fish specialities, lamb, smoked ham and cheese. 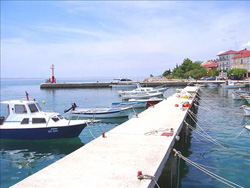 Additional facilities: Small yachts can be moored at the northern end of the harbour, which is partially protected from the northeasterly and southern Adriatic winds. The sea here is 2 to 5 metres deep.We recommend: visits to the Cape of Kula, where the ruins of Večka Tower can be found, to the pre-Romanesque Church of Saint Paul, and to the nearby Rovanjska inlet where Saint George’s Church is situated. A medieval church situated on the Adriatic highway between Starigrad and Seline. In the vicinity, there is a graveyard dating back to the mid-13th century. Its eye-catching tombstones, made from hefty stone slabs, are still standing, sometimes decorated with simple, shallow relief forms from the period between the 14th and 16th centuries.

The church was built in the pre-Romanesque, old Croatian style, probably at the turn of the 10th century. Near the church, there is also a small building, which was probably used as a baptistery. ‘From the fragments, we are led to believe that the church was built with the help of the votive gift of a benefactress, as was the case with the construction of churches and chapels in the old Croatian period.’ – Rukavina, A., Zvona ispod zvijezda (A bell under the stars), ‘Ličke župe’, Gospić, 1984.

Over the past few years, archaeological research has been carried out at the site, which will certainly lead to new discoveries about the church.

Aside from the Church of Saint Peter, several other medieval monuments are situated in the area and are well worth visiting: 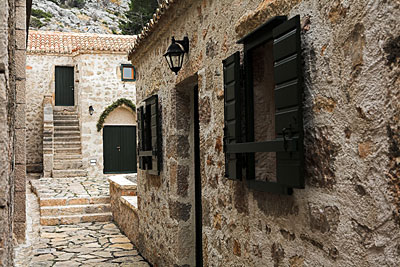 The ethno-house is situated in the old hamlet of Marasovići on the very edge of Paklenica National Park. It has been renovated and remodelled from cut stone to reflect times gone by, and the interior of the house is furnished with restored pieces.

Entering the house is like entering another world. You discover old handicrafts and tools, an ancient way of life, and will learn how to survive in a harsh environment lacking any form of modern technology. 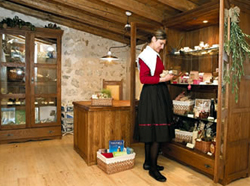 In the Marasović ethno-house, a small exhibition presents some of the household, farming and other equipment, tools and furnishings that have been preserved, conjuring up for us part of the long, rich past, the way of life, the customs and beliefs of the people from this region.

There is also a small shop in the house offering information and ethnic souvenirs. The Marasović Ethno-house is situated in Starigrad-Paklenica in close proximity to Paklenica National Park, in the hamlet of Marasovići.

In the authentic ambience of the Marasović ethno-house,you can try the traditional cuisine of this area, which despite being modest and simple, is rich in flavours and aromas